Drought Tolerant Landscaping Ideas: 5 Plants You Can Use for Your Garden

In terms of planting gardens and designing backyards, living in hot, unforgiving climates can put a bit of a damper on the plant selection. Not every flower, tree, or shrub is capable of withstanding extreme temperatures. If you’re not aware of what you plant, living in a drought-prone area can leave you with a whole lot of dead flora.

Thankfully, there are some gorgeous grasses and greenery out there that drought tolerant and absolutely hardy. If you need some landscaping ideas for your dry Californian yard, we’ve got five plants you’re sure to love. 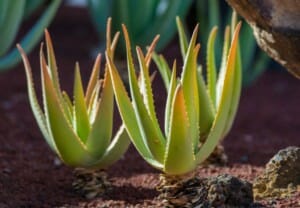 Aloe is an extremely versatile plant that looks particularly good bordering walkways or patios. Although native to South America, these vibrantly green plants can be found in a variety of regions and climates—including alpine locations and grasslands. However, hot and dry areas is where they truly thrive.

Aloe are commonly classified as succulents and are almost ridiculously easy to grow in gardens and backyards. Once you have a sizable group in one area, you can cut or pup sections off and replant them somewhere else. They will almost always take root.

Most aloes need irrigation every other week. You can even afford to do less than that during colder or rainier seasons.

If you’ve ever come across the common wormwood or the California sagebrush, then you’ve bumped into the Artemisia plant. These evergreen shrubs have a pleasingly herbal sort of scent that can make the area feel purer and more tranquil. If you want to work them into your landscaping ideas, know that they’re great at defining borders, so make sure to plant them in bunches.

Throw in some ornamental grasses or succulents (such as aloe) to really paint a pretty picture. Artemisia plants often have soft, silver leaves, so plant them with or near pops of color to create a pretty contrast.

They require little to moderate water. Sprinkle them with a healthy coating maybe once or twice a week—and even less during rainy months.

Desert beardtongue flowers are narrow, bell-shaped flowers that usually come in gorgeously vibrant colors—the most common of which are red, peach, royal purple, and salmon. Because of this, they tend to attract a lot of hummingbirds, butterflies, and bees, so keep these little visitors in mind when you’re brainstorming landscaping ideas.

As the name suggests, these plants are capable of living in desert and mountainous terrain. In fact, the desert beardtongue can actually thrive in rock gardens.

A handful of times a month should be perfect. Never water them too much—they require fast drainage and easily wither when their roots stay submerged.

Despite being a native of California, this dense clump of forest green and/or deep purple grass originates from tropical Africa and southwestern Asia. Its flowers resemble feathers and come in either copper pink or dainty purple.

So-named because of the way the flowers curve and fall outward to resemble streams of water, fountain grass is ornamental, easy to grow, and requires very minimal irrigation—which is why it’s so popular in drought-tolerant landscaping. In fact, it can ever go months at a time without water. It is also quite hardy in cold weather, and can thus be left standing all winter.

Give it a light misting or moderate irrigation once or twice a month.

Although evolutionarily capable of subsisting on very little water, new lavender shrubs should be watered enough during their first year to keep their roots moist. After the first year, you can slowly trim its watering schedule to less frequent—but no less thorough—treatment. Drawing its name from the distinct purple blooms it produces throughout the year, lavender is known for its smooth fragrance and frankly overwhelming popularity in the field of aromatherapy and essential oils.

It’s relatively easy to grow and nurture after the first few months, and it very rarely contracts diseases. If you want something lovely and fuss-free, choose lavender.

Although we did mention it needing consistent watering during the first year, do not water it every day. Too much water will kill it. Check on it every few days to gauge its water needs by testing the soil. If it’s still wet or lightly damp, skip the watering completely.

There are at least a hundred other drought-tolerant plants that you can use to fuel your landscaping ideas. However, these five are our top pick due to their aesthetic value and general, overall user-friendliness.

A Word from the Owner

Thank you for your interest in AJ’s Landscaping. I started this company with a passion for creating beautiful outdoor settings and providing solutions to save my customers money on water and maintenance. Over the years we have established a reputation for our customer service and communication. I look forward to the opportunity to work with you, and include you in our growing list of satisfied customers.

CALL AJ’S! Whether you’re looking for new landscaping, maintenance or both, we offer FREE ESTIMATES.