Brentwood Masterpiece: Elegant, sophisticated and fun for the entire family!

Elizabeth and Bill acquired a lovely, brand-new house out in Brentwood, CA. It had a standard dirt yard that was pretty plain and not much to look at. They described it as “a mud pit,” and wanted something more entertaining—both visually and functionally.

They found us through Susan Friedman Landscape Architects who designed their new outdoor space. The client chose AJ’s because of their enthusiasm and impressive level of communication. They overall felt like they could really trust us to perfectly carry out their vision. 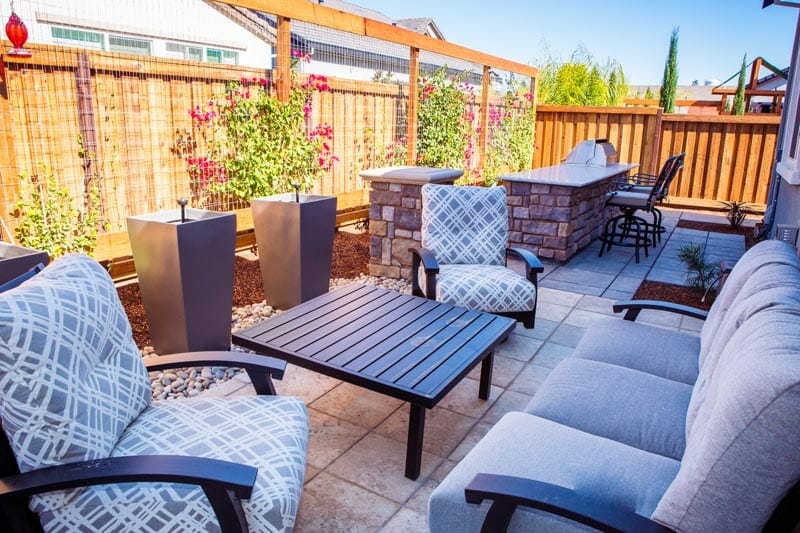 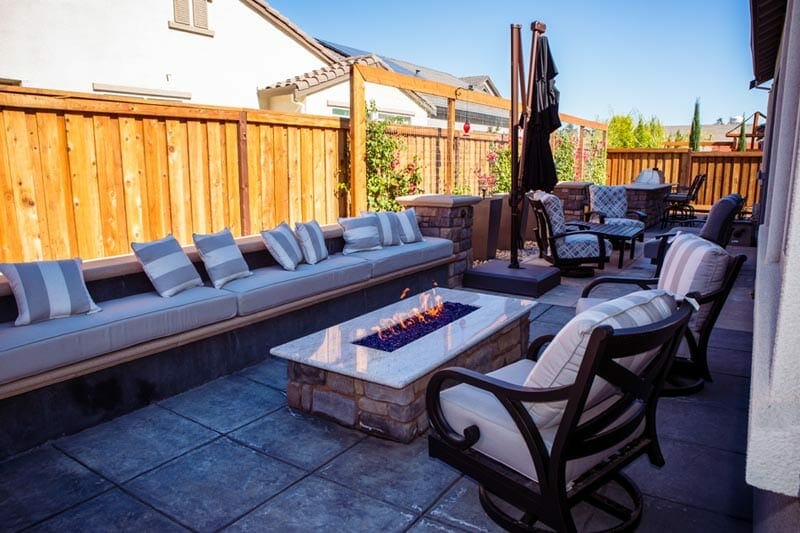 Since the client wanted to create a more entertaining backyard, they decided that an outdoor kitchen—complete with a barbecue island—was a must due to it being functional and highly practical. They also wanted a fire table installed for a bit of flavor, a water feature, a siting wall, and a good deal of landscaping.

The biggest challenge was perhaps finding a way to make all of the elements fit in such a way that the yard would look lively instead of overdone. We took into consideration the scale of the project in respect to the space constraints and mapped out a rough timeline for everyone’s reference.

We initially started planning in February 2017 and aimed to finish everything up by June of the same year. 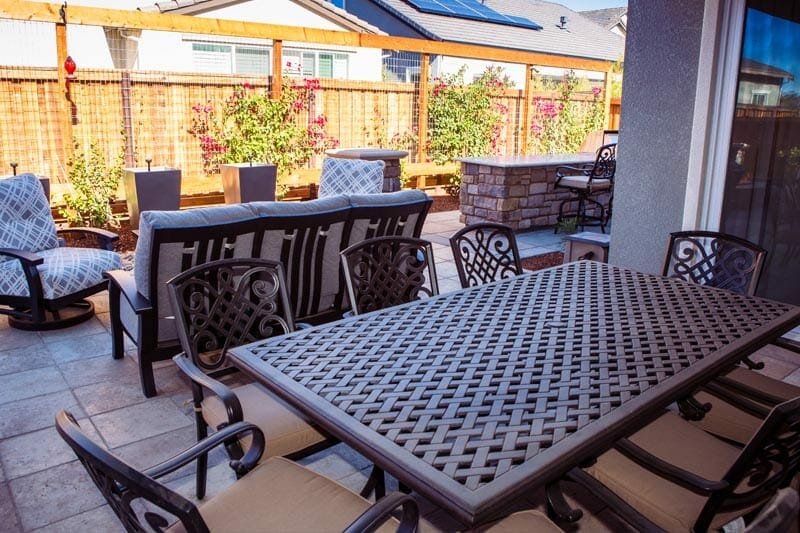 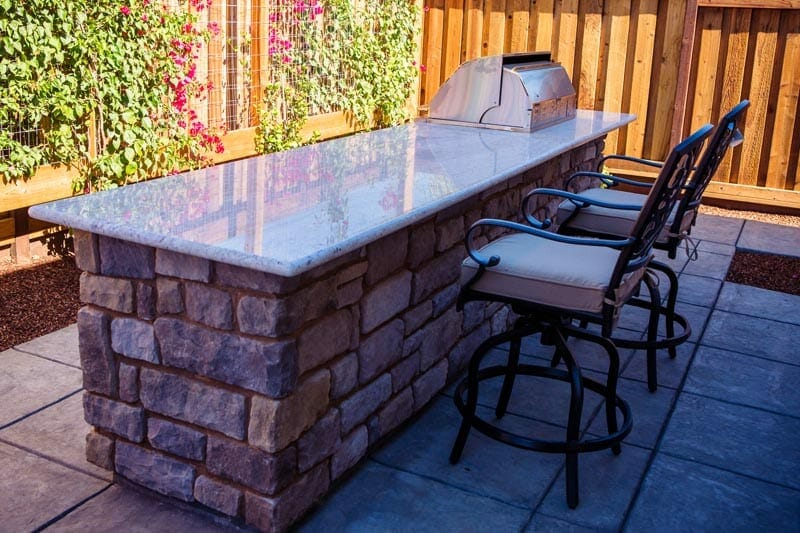 Elizabeth and Bill decided to go with us. As mentioned earlier, they credited our enthusiasm and open communication with the trust they ultimately placed in us to transform their yard into something bold and beautiful, and we were prepared to (over) deliver.

We built the outdoor kitchen to their standards, ensuring that everything was as sturdy and stable as it was possible to be. Knowing that they planned to do a lot of entertaining and cooking in it, we recommended flooring and building materials that were both durable and aesthetically pleasing. The barbecue island received the same treatment. We followed the design to the letter, utilizing our own industry experience to ensure that safety and stability were prioritized without compromising the overall visual effect.

After we were done installing the two major features, we then focused on the smaller details that would complement the highlights. We collaborated with Susan to execute the entire process and achieve the rich, cohesive design that could alternate between the energy and calmness that Bill and Elizabeth wanted. We also made sure to ask for their thoughts and opinions every step of the way. We didn’t

Alongside the outdoor kitchen and fire table, we installed the sitting wall and water feature that they wanted, making sure both strongly complemented the setup. We also performed minor landscaping, irrigation, and mood lighting as finishing touches, tying the yard together in one aesthetically pleasing bundle.

They loved it. Both Bill and Elizabeth were 100% satisfied with the overhaul, claiming that it was exactly what they wanted their backyard to look like. It perfectly blended elements for entertainment and relaxation. It wasn’t party central—it was a private oasis nestled right in their backyard.

“AJ's transformed the backyard of our new home from a mud pit into a resort like retreat, great for entertaining or just relaxing. They did it on time and on budget, and kept the lines of communication open throughout the whole process. I highly recommend Chris and his talented, thoroughly professional team!" 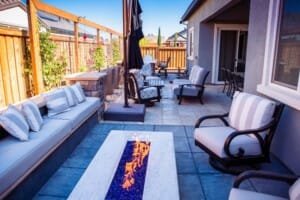 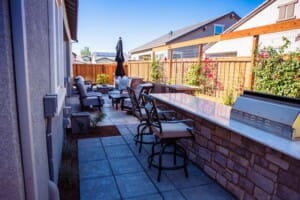 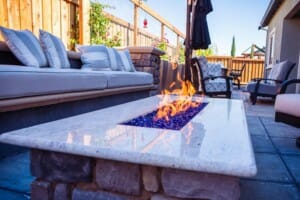 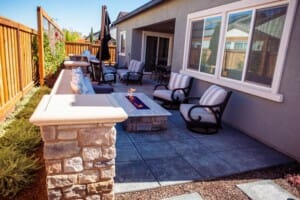 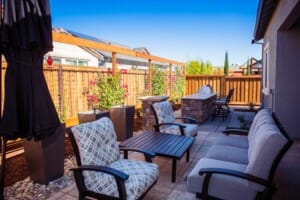 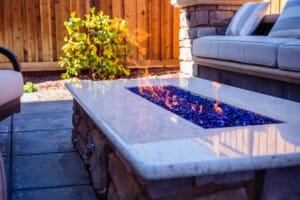 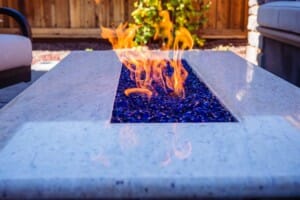 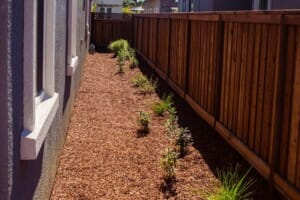 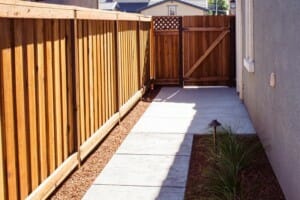 More Case Studies
Tell Us About Your Project

A Word from the Owner

Thank you for your interest in AJ’s Landscaping. I started this company with a passion for creating beautiful outdoor settings and providing solutions to save my customers money on water and maintenance. Over the years we have established a reputation for our customer service and communication. I look forward to the opportunity to work with you, and include you in our growing list of satisfied customers.

CALL AJ’S! Whether you’re looking for new landscaping, maintenance or both, we offer FREE ESTIMATES.